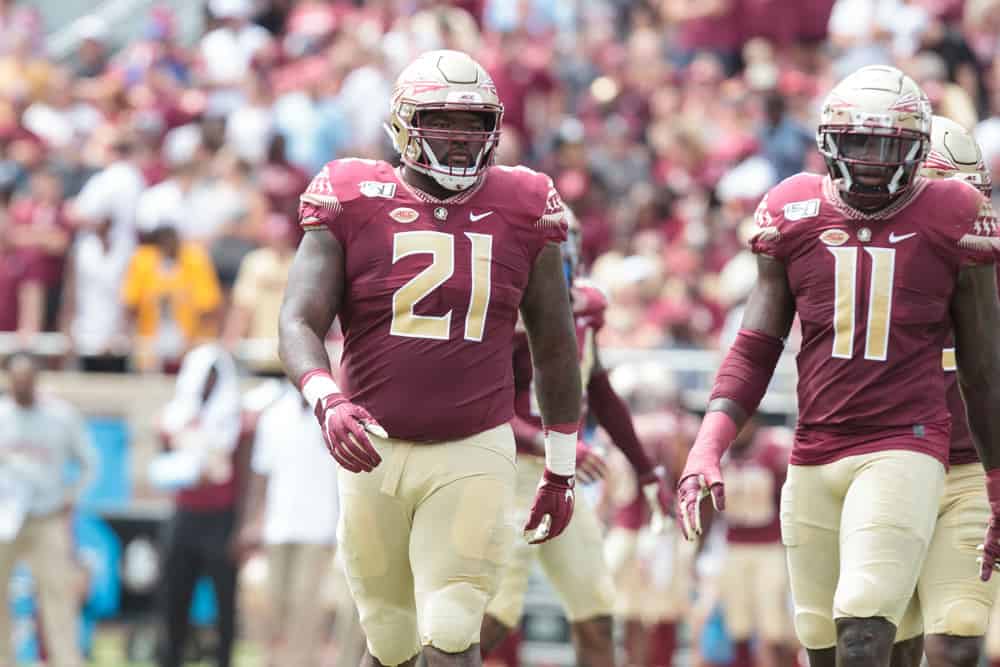 Welcome to ColdHardFootballFacts' look back at the 2021 NFL Draft, where we're breaking down the 10 most imapctful undrafted free agents who stand to make a difference during the 2021 season.

10) Arkansas TE Miller Forristall, Tennessee Titans — Forristall was an elite high school prospect who stayed in state and slogged through the Chad Morris era. He's extremely talented and has both the athleticism and physicality to contribute at the NFL level ... and should get a chance to do so with the Titans scrambling to replace the production of Jonnu Smith.

9) Miami K Jose Borregales, Tampa Bay Buccaneers — Arguably (and likely) the best kicker in college football, Borregales has a real chance to win the job in Tampa, where he could end up attempting meaningful kicks in the playoffs as an undrafted rookie.

8) South Dakota State WR Cade Johnson, Seattle Seahawks — This pick screams Seattle, where the Seahawks have a history of capitalizing on overlooked small school contributors. That fits Johnson to a T, and he might just fit Seattle's system well enough to land on the final roster.

7) Kansas State LB Elijah Sullivan, San Francisco 49ers — An undersized, chase-the-run linebacker, Sullivan feels like a decent bet to land a roster spot because of his special teams capabilities based on his athleticism and intensity. Where he goes from there (Sullivan could be a better fit at safety at the NFL level) is up to the 49ers.

6) SMU QB Shane Buechele, Kansas City Chiefs — For many teams, this would be an odd fit, but with legendary Chiefs coach Andy Reid any quarterback can be the maestro to a symphony. Buechele could absolutely be a capable backup to Patrick Mahomes and might actually bring a level of versatility that matches Mahomes. Clearly fans would rather not see him, but from a long-term perspective he's an interesting player worth watching.

5) Syracuse DB Trill Williams, New Orleans Saints — Who Dat nation was desperate to see more than one flashy defensive back come off their big board during the draft, but got just one instead in the form of Stanford cornerback Paulson Adebo. Trill Williams was a draft graded prospect who was the clear standout at a Power 5 program. With the Saints need for depth at both cornerback and safety, don't be surprised if Williams, who could also contribute on special teams, makes his way on to the final roster.

4) Arkansas QB Feleipe Franks, Atlanta Falcons — We're coming up on the end of the Matt Ryan era in Atlanta, which means the next guy who happens to be there if Ryan goes down with injury could get a serious look at becoming the next franchise guy. Could that be Franks? He has significantly more upside than career backup (and retread) Matt Schaub and plays a style that should fit with new head coach Arthur Smith. A former elite high school prospect who started at Florida before transferring to Arkansas, Franks should have a real shot at winning the backup job.

3) Florida WR Trevon Grimes, Philadelphia Eagles — Everyone is excited about DeVonta Smith in Philly, but they should also pay attention to Grimes. A one-time top overall WR recruit who started at Ohio State, Grimes showcased his speed, elite ball skills, athleticism and determination in the Swamp. This is a guy that should make the final roster, and from there it's anyone's guess.

2) Florida State DT Marvin Wilson, Cleveland Browns — How does the former No. 1 overall recruit in the nation not get drafted based on pure potential alone? It's a heck of a mystery, though not being selected my have worked out better for Wilson, who allegedly was able to bargain a record-setting contract with the Browns. The Houston native put up the weakest numbers of his career in his final season, though that was in no small part due to a series of injuries, all of which forced him to miss time.

1) Alabama LB Dylan Moses, Jacksonville Jaguars —  Like Wilson, Moses was as elite as it gets coming out of high school. That's the good news. The bad? In 2021, it seems everyone wants versatility and speed. That could be an issue for Moses' physical state as the one time middle school recruiting target suffered surgery that should keep him out of the 2021 season. The Jaguars appear likely to reap the reward for their patience when he comes back in 2022.