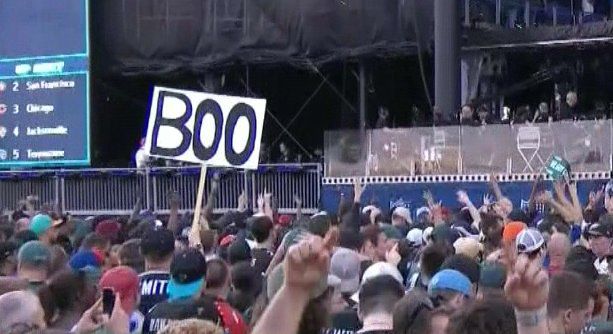 Welcome to ColdHardFootballFacts' look back at the 2021 NFL Draft, where we're picking apart the highest of the highs, lowest of the lows and biggest head scratchers of the draft, starting with what looks like the safest surefire hits to come.

THE HOME RUN: TE Kyle Pitts, Atlanta Falcons, Round 1 Pick 4 — A tight end as the biggest winner in the entire draft? You better believe it. There isn't much to say here except that Pitts has the potential to be Rob Grownkowski except faster with better hands and, dare we say, maybe even more durable? His potential is almost terrifying, and good on the Falcons for bucking up and taking him there rather than choosing a developmental quarterback to sit behind Matt Ryan.

THE BIG GAMBLE: QB Trey Lance, San Francisco 49ers, Round 1 Pick 3 — Lance is young, untested and phenomenally talented. He also is allegedly exceptionally bright, charismatic and perceptive. How quickly he gets up to speed with the NFL could be the difference between San Francisco contending for Super Bowls for the next decade and Kyle Shanahan and John Lynch looking for new jobs.

THE REACH: CB Jaycee Horn, Carolina Panthers, Round 1 Pick 8 — The son of Joe Horn is (predictably) very, very fast. He also has strong coverage skills, but wasn't as battle tested as Patrick Surtain Jr., the next cornerback off the board. That leaves plenty of question marks about whether he was really worth reaching for in the top-10.

THE REACH PT. II: OT Alex Leatherwood, Las Vegas Raiders, Round 1 Pick 17 — Leatherwood was a premier high school prospect who delivered at the ultimate collegiate power program, but he was a bit of an Achilles heel for the 'Bama line at times. Despite his impressive frame and compete rate, Leatherwood was the frequent weak point in Alabama's pass protection, is far less well-rounded than Christian Darrisaw and others who were still waiting to be picked, and was widely seen as a Day 2 selection, potentially in the third round, at that. Leatherwood is a definite NFL player, but anyone picked in the first round should be a guaranteed star.

THE STEAL: OT Walker Little, Jacksonville Jaguars, Round 2 Pick 45 — If he had been healthy in 2019 or played in 2020, Little almost certainly would have been a first rounder. Instead, he barely played in his junior season due to an injury, then skipped what would have been his senior season. He was inarguably the best offensive lineman in his high school class and has the size, intellect and dogged competitiveness to make him a long-term standout ... if he's healthy. He insists he is, which could mean the Jaguars land a long term foundational building block midway in the second round. That's the definition of a steal.

THE STEAL PT. II: QB Davis Mills, Houston Texans, Round 3 Pick 67 — If there was any question about just how seriously the Texans are taking the allegations against Deshaun Watson, they were promptly answered when Houston finally landed on the clock in Round 3. While there are glaring needs all across the team's roster, Mills is still a remarkable pick up this late in the draft. Like his teammate Little, Mills' Stanford career was sidetracked by injury, which also likely contributed to his once-in-a-blue-moon, head-scratching forced passes. Mills is an intellectually brilliant quarterback who has the strong arm and accuracy to be a longtime NFL starter. Given everything going on in Houston he might even get the chance to prove that much sooner than many would expect.

THE STEAL PT. III: LB Dylan Moses, Jacksonville Jaguars, UDFA — Yes, he's coming off an injury, but the entire draft came and went without anyone selecting Dylan Moses? The player who was once seen as the most dynamic, surefire middle school recruit not to play the quarterback position ever? Yes, knee injuries are scary, but Moses history and his ability to live up to the accolades should have been enough to make someone take the plunge. We're not sure if the Jaguars will reap any benefit this year, but we'd consider it a near certainty come 2022.

TEAMS AT THE FRONT OF THE CLASS: Patriots (they got their quarterback and gamebreakers on defense to boot), Bears (they gave up a lot, but getting Fields should be a watershed moment at Soldier Field), Dolphins (another year, another excellent draft in South Beach, with multiple top-graded picks), Giants (it wasn't the draft they expected, but the Giants solved some needs and accumulated future draft capital heading into a year in which they shouldn't be Super Bowl contenders anyway).

TEAMS SENT TO DETENTION: Raiders (almost every pick they made came higher than their grade, and by a lot), Texans (kudos for the Mills pick, but they needed tons of defensive help and got none), and Packers (jilt the already angry Aaron Rodgers in Round 1, then scramble back to appease with lesser talent? OK guys)